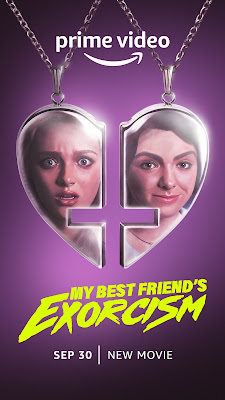 After going away with friends to a remote cabin where they mess with a Ouiji board, Abby soon realizes that something terrible has happened to her best friend Gretchen. She's become possessed by a demon and if she doesn't do something she will lose her friend forever.

This horror comedy doesn't quite work.  Even if you forgive the film feeling a bit too similar to other films, the film's real problem is that it never gets the tone right.  Is this a horror film? Is this a comedy? Is this a buddy film? The answer is yes, yes and yes. It's all of them at the same time and as a result it's not really much of anything. If you want the best example of this consider the actual exorcism bounces from jokes to scares to what should be an emotional moment as the girls express their love of each other. But it falls flat. The problem is the film never nails the tone down so there is no emotion. We chuckle,  but we are never scared. Basically the film is so all over the place it never generates any sense of danger and as a result we are never are invested in what is happening on the screen.

I blame the script. The dialog is a bit too mannered. It is full of way too many references to products and  details from 1988 from when the film is set. Its over done. No one uses brand names in every sentence and for every item. It sounds like desperate attempt to make you think it was 1988 because the director didn't know how to create the feel in other ways. Worse the whole thing feels incredibly knowing,  where everyone is letting us know what a good time  we should be having but never actually supplying the good time. The dialog and writing is such that the characters and situations don't feel real but instead feel like a Hollywood construct by a writer who only knows people and life from TV sitcoms.

Another thing that I can't sort out is who is this film for? While the film is rated R, the film plays out as if it's really for kids older than five and those not old enough to go to an R rated film. There isn't anything for an adult and it's a bit too old for a young kid. They are the ones who are going to think this film was written just for them.