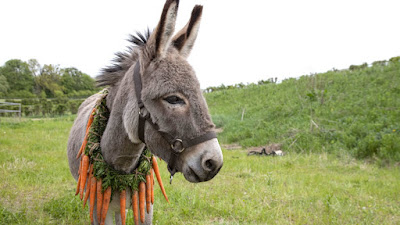 EO is a beautiful film it’s a film that draws comparison to Bresson’s Au Hasard Balthazar since both are about the life of a donkey.  However unlike the Bresson film EO is wildly all over the place.

Nominally EO is the story of a donkey who lives and works in a circus is taken away by authorities. He is brought to a farm and eventually ends up wandering the country side having adventures.

The truth is this is like 9 or 10 films mashed together. We get all sorts pieces of stories that could be longer films unto themselves. More to the point as the film goes on Eo is just a link say between the truck driver story and the suspend priest tale. They are short and sweet but other than giving director Jerzy Skolimowski to do little vignettes (and work with Isabelle Huppert) they kind of go nowhere.  Additionally after a certain point it’s not clear how we get from place to place. When Eo is beaten by the soccer thugs  he goes to a hospital and then we see him working in a guy with animals he seems to be electrocuting, how did he get there?

The pieces themselves are fine but that’s all they are, pieces. There is no sense of ending. Even the end of the film was out of left field. Walking out of the film I spoke with a couple of people who were scratching their head. I also spoke with one journalist who had seen the film at Cannes and loved it but on seeing it a second time found it didn’t hold together.

Its  a beautiful film, and has moments, but it never comes together as a whole.