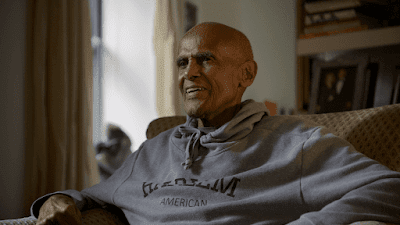 This is the best I can do right now in  the area of a review. I say this because I started to write a piece which annotated the film in order to give context to the the things, the films and the people that the film mentioned but glossed over. I desperately wanted to give you the reader a better context of what was in the film because too much is mentioned and not enough context is given. After several hours of fighting it I cut it all back and just went with a review.
Elvis Mitchell's IS THAT BLACK ENOUGH FOR YOU? should have been a series, or in the words of fellow Unseen Films writer Randi when I was speaking to her after the screening, a graduate level college course. As vital as the film is more often then not the film gets lost with the massive data dump of names and people it is attempting to present to the audience with not enough context.

Nominally a look at Black Cinema from 1968 to 1978, the film is also a look at how Mitchell's view of film was shaped going all the way back to when his grand mother discovered the movies and her dreams became stories. The period covered is the period where the portrayal of Blacks in films changed thanks to films like the mainstream IN THE HEAT OF THE NIGHT and the low budget and independent  films that started what would become Blacksploitation under the leadership of directors like Melvin Van Peebles, Ossie Davis and Gordon Parks further pushed the envelope further. It follows things to the point in 1978 when THE WIZ died and made Hollywood think twice about making Black films

The easiest way to explain this film is to say is that there is a great deal to unpack here and quite honestly after a very good start Mitchell loses his way. He aims to tell us every thing  but it gets away from him. In covering the early years Mitchell speaks specifically about the films and how things changed. We get a context for everything. We know why things matter.

The trouble is as as time movies forward Mitchell pickes up the pace and begins to flood us with films, names and events, and in doing so he begins to drop the context. We are left with little understanding of many of the films, especially important ones like COOLEY HIGH, which changed perceptions and influenced hundreds of films that came after. Why are the the films after say 1972 being put front and center when other films are not? Mitchell doesn't really tell us, he simply assumes we know the films already.

Mitchell also is narrow in his focus as to who is important, Poitier, Belafonte, Van Peebles, Davis and Parks are named directors  of importance but someone like Michael Schultz, who did COOLEY HIGH and CAR WASH, as well as others while not being a media darling is not.  Why isn't Fred Williamson mentioned beyond THE LEGEND OF (BLACK) CHARLIE, since his framing of how his characters were presented altered the way many people saw lead?

While there is nothing wrong with what is here, you really have to understand that there is way way more to this story. Each film fed on what went before and didn't exist in a vacuum. Here many of the films stand alone and are not tied together and we need to know the connections to understand more fully the history.

This really is a story that needs multiple hours of screen time to explore. If you need proof consider that the whole soundtrack thread, which seems to steer the second half of the film,  needs several hour unto itself.  The film needs more because even to discuss this ten year period you need to know more of what went before and you need to know where things went after this because despite Mitchell rushing through what happened next this time period set up seismic shocks that would soon change cinema as we know it.

To be honest I do like the film, but there is simply way too much being left out. As such this film is a good starting point, but the truth is there is much more that needs to be told.