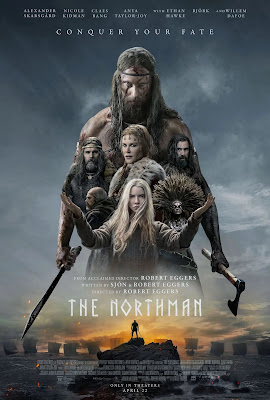 Brooding viking tale from Robert Eggers is a great looking film about a viking prince whose father is murdered by his uncle. Fleeing into the wilderness he becomes a berserker before being told by a sorceress that he must no go back and avenge his father.  Disguising himself as a slave he begins to plot his revenge.

Somber beyond words mythic tale is going to either thrill you or bore you. This is a film that is not so much a portrait of living humans, rather its the story of mythic characters where everyone pone doesn't converse naturally but speaks in formal declarations. This is a tale of the dark ages that is set in a dark world where the sun almost never shows itself.

Yea, it looks good  and the action is excellent but it's kind of silly with the pronouncements making one giggle. I'm sorry this film takes itself so seriously that no one in their right mind really should.  In all honesty I was glad I was watching the film on Amazon Prime instead of having paid money to see it in a theater or on VOD.

If you want to see a great looking but overly serious film THE NORTHMAN is for you.