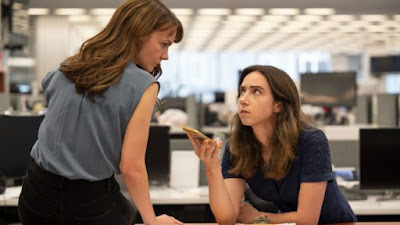 Maria Schrader’s look at the the reporting that broke the Harvey Weinstein case is an uneven but ultimately moving account of  reporters Jodi Kantor and Megan Twohey struggling to get the facts.
I have had a lot of discussions of what the film is and is not and what the film left out or changed.  After the film everyone wanted to talk. All of these discussions, with film writers who have hate-ons for Weinstein, were interesting to a point but all were less about what the film was but more about how they would have done it differently,  most insisting that the film failed because it didn't deal with events outside of the story of the two women at the center of the film. Why wasn't anyone meeting the film head on and discussing it for what it was and not what it might have been?
I took the film head on for what it is and I ended up liking it a great deal.  Playing like a kind of ALL THE PRESIDENTS MEN for the modern age its a lot of people talking on cellphones and knocking on doors. Cellphones are the way of the world (despite several reviews taking the film to task for showing how things were) and while they are not the most exciting things visually it is how we communicate now.  While the film doesn't have the life or death stakes of the earlier film it still gets tense because unless we are well versed in the story we don't know what Weinstein might do.
I was moved by the film several times during it. It wasn't the predictable crowd cheering moments that moved me but small moments such as when Jodi Kantor's young daughter mentioned rape and said the boys were talking about it and you suddenly realized how such a vile act is trivialized. Other moments moments had heavy impacts thanks to great supporting performances.
And that brings me to what I see as the one real flaw in the film and that is that as written Kantor and Twohey are the least interesting characters on screen. there is very little to them. They are reporters and they are mothers and that's all we know about them. We get no sense of them outside of that. In ALL THE PRESIDENTS MEN we got a sense of Woodward and Bernstein through the things on their desks (the things on the yellow pad that gets added to) or the odd ticks of the characters, there is no shading here. I know part of it is the nature of cellphones which results in people just standing and talking in random spaces (there are no desks, so nothing on them to give visual clues) but a good part is the writing which eliminates any talk of anything outside of the story or being a mother.
Thankfully the cast is so good across the board that we really don't notice it much since we are carried along by performances that are so good the actors disappear into their roles.
I really liked this film. Say what you will, this attack on sexual predators in Hollywood and elsewhere, the film begins with a broadside at Donald Trump, is a vital and important film, that also manages to be a damn compelling and, dare I say it, entertaining film.
Recommended
Posted by Steve Kopian at October 16, 2022