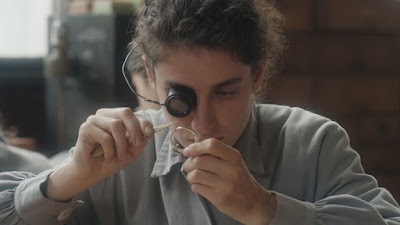 The exact sort of film you don't really see much but which has been a staple of the New York Film Festival for decades. A beautifully constructed historic film this is a film who has it's roots in the work of filmmakers like the Taviani Brothers, Luchino Visconti and Roberto Rosellini. Five minutes into the film my thought was "of course this is at NYFF, this is the sort of film that makes the film makers go crazy"

Cyril Schäublin’s UNREST is centered around the story of photographer and political  thinker Pyotr Kropotkin who in the 1870’s was introduced to Anarchism while taking photographs in Switzerland and a watch factory.

Finely structured and tuned the film feels like one of the watches made on screen. This is a film where every detail no matter how small has been perfectly crafted for maximum effect. As I said at the top it’s a film that reminds me of the art films of the 1970’s and 80’s that filled my film classes of my youth. This is a film that is very much about something beyond just the story. For me film was a blast of nostalgia of the sort I haven’t felt in a long time.

And yet the film gives as moments where the various characters, most without names come alive before our eyes. As you watch the brief exchanges between people or the way the actors interact, say bumming a light for their smoke,  we realize that these people are more than just a facade. The cast here magnificently creates a whole  world where everyone is part of it. This is in contrast to most Hollywood films where anyone not a named star just is filler.

I really liked UNREST a great deal. I went into it out of obligation to cover it because it was part of the New York Film Festival and instead came out with a film I ended up recommending to friends.