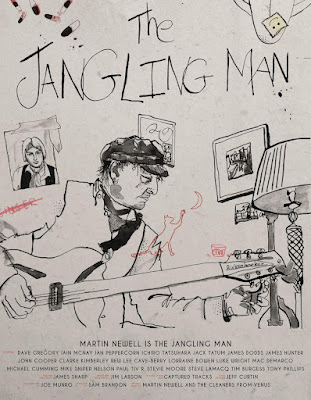 This doc about Martin Newell and The Cleaners From Venus is awesome. It's a film I should have reviewed a couple weeks back but things happened. Its kind of like Newell's story about the making of the film, which he said was supposed to be a 20 minute film in 2018 but things happened and years of filming happened as the filmmakers went through his whole phone book and interviewed everyone in it.

Newell is a guy who was never in the spotlight. Sure he worked with the likes of XTC and the Damned but most people don't know who he is since he was a cassette and do it yourself guy who never clicked with the world at large. He was so so DIY that when Captured Tracks went to him to reissue his music in a more accessible way he told them to take a hike. Of course he relented eventually.

I love this film. I love Newell and I love his music. I kind of had an idea who he was because of friends, but until I saw this film I really didn't know much of anything. Now I do and I've been hunting down his music. Actually what I've done is watch the film a couple of times instead of writing on it because of the screener I was sent just because Newell is a good good guy and the music is awesome.  This is the best kind of movie-one you want to watch repeatedly because the people in it are so cool.