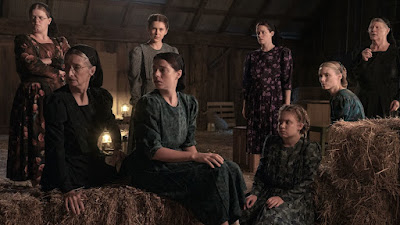 For generations the men of the Colony drugged and raped their women in the middle of the night. The women were gaslit into thinking it was the work of Satan. When one of the rapists was caught the women revolted and attacked the rapists. Told by the men that they must forgive the rapists or be excommunicated and damned to hell the women are given two days to decide what to do- forgive the men,  fight the oppression or simply leave. When the vote is tied between fighting and leaving, two families were chosen to decide the fate of all the women. They retire to a barn to discuss what must be done.
Sarah Polley's film adaption of Miriam Towes novel is a very messy polemic. This isn't a film but a long pained scream into the night regarding sexual abuse and incest, specifically in a religious society, though it's pain comes from general hatred for misogyny as well.  Its a film that so wants to end the evils it sees that it never fully engages emotionally. It's so focused on the desire to get it's point across as to be clinical in it's telling. Worse the women discussing things are not fully formed characters but sketches with visual traits and speech patterns so we can tell them apart. They do not come across as women who have been held down for all their lives but a member from a debating team who loads every line of dialog with precise meaning... to the point that all of the women speak with the same voice. These are not women discussing their pain but Polley breaking up her sermon into different lines of dialog. While I understood going in this was to be a lecture, I didn't expect it to be one voice. If there wasn't to be any real drama I would have liked at least some semblance of a conversation.
Another problem with the film is that the spiritual side of the story isn't wholly there. These are deeply religious women, we know that because of the discussion they are having, but we never get any real sense of what it is. We get bits and pieces of what the women believe, especially in a late in the game discussion of how leaving informs their belief's desire for pacifism  but it isn't near enough to fully feel any notion of what the women do or why this discussion is so shattering to them.  The religion is just sort of there.
The film has other problems as well, specifically with plotting of the threadbare drama in that it doesn't move, it lurched forward by the hand of writer director Polley who probably pare too much of the source novel.  There is no narrative flow, rather it's all a series of moves by the hand of  the director to move things along. The Daydream Believer playing census taker gives us one bit of information and firmly let us know the film is set in 2010 despite the film feeling about 80 years earlier. Other lines/incidents seem to be shown to us not for a narrative reason but to make sure we know that things, say incest, is happening despite there being other clues. I would not be against them in a film that had more of a narrative structure but things are there just to add backing to the point. The fact that the film's narrative is weak can best be seen in the romance/non-romance involving Ona and the young man named August who returned to the colony which feels completely out of place, largely because we have no backstory. There is something there but Polley pushes it aside.
The film also suffers from its very existence as a film, in that this is something that would have been better on stage where the static nature of the discussions would have been par for the course. It also would have allowed more acceptance of the out of left field turns, and life being in a moment.
Despite being moved to tears twice in the film (once when August says that Ona's child will be able to read what he wrote and the other when the blind girl joins the women)  I never was connected to the "drama" on screen, because there really isn't one.  As I said above this is a polemic or lecture which wins its argument from the first frame but then repeats itself for 105 minutes. This is not to say anything against what the film is saying, rather that if it was hoping to change minds and win hearts it should have given us more than partly drawn characters to care about.
While WOMEN TALKING is an earnest heart felt film with much to say its also a film whose presentation hobbles its ability to do so.
Posted by Steve Kopian at October 12, 2022