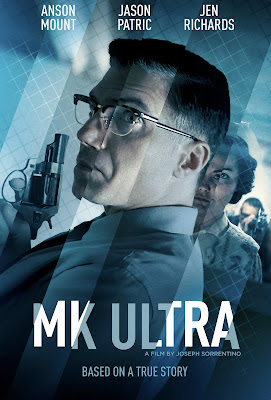 MK ULTRA is based on the CIAs mind control experiments from the 1950’s and 60’s when they dosed both willing and unwilling people with LSD and other mind altering drugs. Written and directed by Joseph Sorrentino a former operative  himself, the film is a surreal dreamy gut punch about the dark things the American government was up to when the country was supposed to full of sweetness and love.

Blurring the line between documentary and drama, we hear recordings of actual CIA agents and discussions on the sound track as we watch events play out, the film also blends the line between clinical and emotional as we watch as the cold CIA operatives go coldly about their tasks as everyone reacts with real world emotion. The result is creepy universe where life is a big experiment until it’s not.

This is a tough film to write about. I could give you the whole plot and you would think it was one thing however the film is not wholly about plot but it’s about creating the mind set of those going down the rabbit hole. Yes the victims of the experiments are drifting down into darkness but at the same time the experimenters are too, with their trek for an answer sending them down and an intellectual track that is going to bite them on the ass. It’s a trip that will rock you, which is what this film is all about.

Do yourself a favor and buy a tab and take a ride.