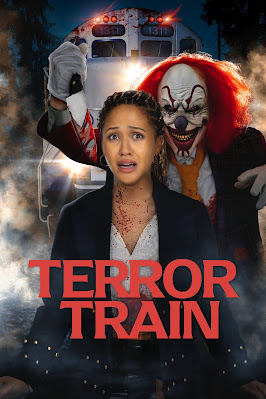 A college Halloween train trip goes horribly wrong as a mad man begins picking off the college kids. Could it have anything to do with a prank that went horribly wrong a few years before?

Oh course it does.

Tubi remakes the 1980 horror film notable for starring Jamie Lee Curtis and magician David Copperfield and little else. That film was an okay time passer that wasn't really scary but held your attention because you wanted to know who the killer was.

I'm not sure why anyone will want to watch this new version because it's far from compelling. Walking through many of the original's scenes as if it were a dress rehearsal, this film really doesn't have much passion on display. Adequately acted the film never generates any suspense. Yes, it's bloodier and yes, they tweak a few things, but there really isn't a reason for this to exist, except that name recognition might bring a few people, like me, to Tubi.

While the film isn't bad, it's okay, the lack of passion, and the sense this was done on a set or before green screens, makes this a footnote film of a footnote film.

Email ThisBlogThis!Share to TwitterShare to FacebookShare to Pinterest
Labels: horror, not worth the effort, remake