BATMAN AND SUPERMAN: BATTLE OF THE SUPER SONS (2022) 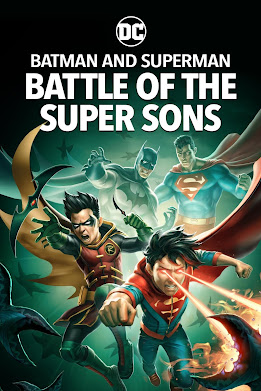 Wow--what a wild couple of weeks it's been for DC fans! What a wild thrill ride! (I know I said "wild" twice, but it's deserved!)

New brass, new (albeit tentative) projects, and a new blockbuster in the form of BLACK ADAM! Again, all I can say is "Wow!"

To be clear, I'm not a DC fan and really never have been except when I was a toddler and BATMAN reruns prompted me to speak some of my first words. But hey, that doesn't stop me from enjoying, or at least trying to enjoy, all the content that the brand produces.

Speaking of which, lost in all the excitement of the past fortnight has been the release of BATMAN AND SUPERMAN: BATTLE OF THE SUPER SONS. And that's too bad because, like so many of the DC animated titles, it tends to outshine its live-action counterparts.

First off, let's get one thing out of the way: the misleading title. If you think Jonathan Kent and Damian Wayne are actually going to do battle with each other, and that this forms the dramatic core of this action-fest, think again. It's more like they go the familiar buddy-movie route of smoldering antagonism that predictably grows into a unique bond as they face off against a common enemy.

Do their more famous Dads feature in the story? You betcha! In fact, in a kind of zombified mode, they take on menacing roles that provide some of the more memorable scenes. Overall, there is a surprising but welcome horror element to the entire film (surprising to me at least, as I'm not familiar with the comic upon which it is based). Is that why SUPER SONS got an October release? I don't know, but let's not complain, my fellow horror hounds!!

To be sure, the first twenty minutes or so are rough going. We get a replay of Superman's origin, which ties into the theme of father-son relationships but doesn't present the familiar story in any new or fresh ways. Also, much of the Lois Lane-centered humor, as well as her earnest monologuing about the importance of the Fourth Estate, are similarly flat.

However, once the grating and unpredictable Damien Wayne enters the plot, things come together nicely. Although the DC Fandom Wiki lists him at 84 pounds and standing all of 4' 6", don't underestimate his attitude--or his skills!

Yes, it's been quite a thrill ride for DC super-fans recently, but if they don't see this nifty little 79-minute feature, they're missing out on a big part of the fun!