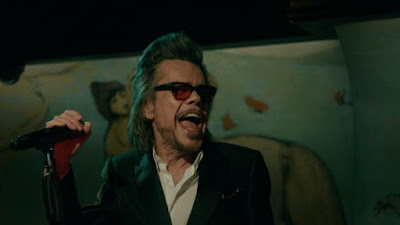 If you only know Johansen thanks to his Poindexter persona you are going to be in for a treat. I say that because you will get to see all of the most amazing things that Johansen has done over the past 50 plus years. We get to see the founding of the New York Dolls, who some say created punk rock (when the band puked on stage) , his delving into the blues, his party music with Poindexter, being on the list of one hit wonders twice and so much more.  There are tons of stories told via the performance, interviews, and video and unless you are Morrissey (yes the former lead singer of The Smiths and huge fan) odds are you will not have heard most of them.

And even if you are not into the stories there is the music. Most of the film is  the cabaret performance which takes in a wide swath of songs from across his  career and it's a joy. Its a wonderful collection of material that reveals how good Johansen is as both a writer and a singer. The performance is supplemented by TV and film performances.  The result is a greatest hits of sorts that will make you run out and buy some of Johansen's records.

It should be noted that the film is in no way to be considered a definitive biography, but more an appreciation. This is a film that celebrates its subject and seeks to spread the joy, as a result it is a pure joy.

I loved this film. I can't wait for it to play Showtime so I can just put it on and listen to it repeatedly.