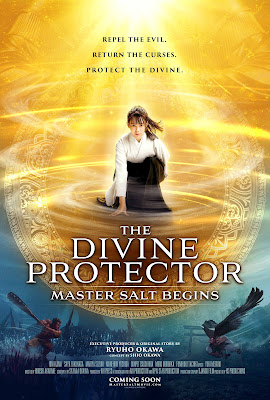 When a young girl has some strange things happen to her, including the appearance of weird marks on her neck, she and her friends summon Master Salt to come and help them get to the bottom of it. SHe finds the girl and several others are being stalked by evil forces.

This is an amusing supernatural tale with lessons to be learned along the the way. This is very much a film about how bad behavior can lead to trouble. While a bit formulaic, this feels like its several episodes of a busted TV series tied together, it does entertain thanks to not taking itself too seriously.

A word of warning if you have a choice to see this between the subtitled or dubbed edition, avoid the dubbed edition at all costs. The vocal performances are completely wrong and the miss the vocal tones of the original completely. I was originally sent the dubbed version and had to stop half way in because it played so badly. When I went back and saw it subtitled I found I was truly entertained.

While I can't say this is the greatest thing since sliced bread, I will say it made me smile. Its a goofy but fun film that I would gladly watch again, which is saying a great deal.