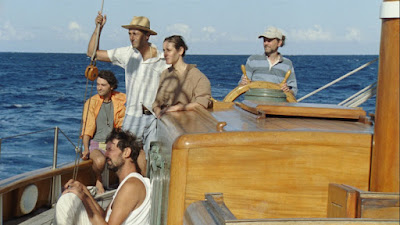 The actual pull quote from the Cineuropa at the top of their review for this film is "the slowest example of slow cinema in recent memory".  While I don't think it's the slowest example, I absolutely don't think this is for anyone who wants any sort of pacing in their films. I mean the film begins with watching a group of people walk down to the sea with the camera holding each shot after they leave the frame. After that we get shots of people sitting and talking, sitting, a short segment that mirrors Derek Jarman's BLUE and some other stuff.

The problem with all of that and the other stuff really goes no where. Yes, it's supposed to have something with the woman at the "center"  of the tale boating around and pondering the life of the Legionnaires but none of that is really on the screen. Seriously there isn't enough material in the film to have it make sense despite what the filmmakers and festival programmers will insist is there.

Simply put I don't think this film adds up to much.  Its a lot of pretty pictures with nothing much to link them up except wishful thinking. Sure if you love pretty films on a big screen (or need sleep) this is worth a look but unless you like films just short of paint drying and cryptic

Email ThisBlogThis!Share to TwitterShare to FacebookShare to Pinterest
Labels: drama, france, not worth the effort, NYFF 2022