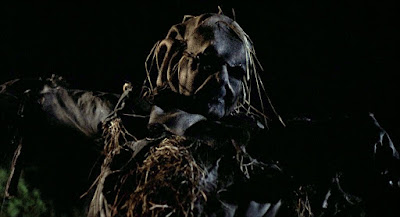 Because Alex Vorkov mentioned this on Twitter I realized I never reviewed this here at Unseen Films. Here is the review I posted at IMDB in 2004

This film has to come to be discovered soon so that more people can discover this chilling little trip into hell.

The plot is simple, fleeing in a plane from a heist with hostages in tow, one robber tries a double cross by jumping out of the plane with the money and the others go back after him. The trouble is where they ended up is not where you really want to be,its a farm in the middle of nowhere and undead things are moving about and they are out for blood.

Very little of why these things, these scarecrows, are lurking about is explained and its more terrifying for it since we don't know what the "rules" are. This film takes place in one blood soaked night and there isn't time to explain whats happening. All we know is that first these bad guys want their money back and second they want to stay alive. They don't have time to worry about anything beyond that. For me thats a big plus since its realistic, if you got into a situation like this you wouldn't care about the hows and whys, you'd just want it to stop. Some people need to be hand held and told every thing at every minute, if you need to know exactly why and how go somewhere else, since the film won't give you that, however its internal logic never fails.

If you love horror or thrillers see this movie. This is one of the best, shot in low light and heavy shadow, it become oppressive, especially if you watch it with the lights out. This movie will freak you out, and make you wonder about that man hanging out in the fields.