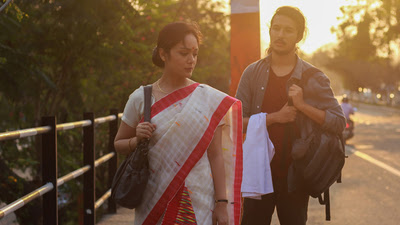 AAMIS is lovely little poisoned confection that I adore. It is probably not for all tastes, especially since the film goes dark in the act, but at the same time it is so unashamedly a love story you can't help but go with it.

The plot of a film has a grad student going to a clinic to get a doctor to help a friend who over ate. They have a meat club where the usually vegetarian group will some times prepare a meat dish. The student's friend had over done.  The result of the house call is that student and the doctor become friends bonding over clandestine meet ups for meat dishes. As time goes on their obsession for the meat and each other grows,despite the doctor being an older married woman.

That the film works as well as it does is due in part to the actors who sell the romance so well you never think of the film as anything else. Mostly it is due to writer director Bhaskar Hazarika who always keeps the tone exactly right. Yes this goes into dark places but at the same time you are not worried about the larger implications only whether the lovers will end up together. It is a brilliant piece of juggling that I don't think most directors could have handled with out dropping a ball or two.

AAMIS is a stunner. It is one of the great surprised of Tribeca. I say that because I really didn't want to see the film until I met someone who saw the film at a pre-fest screening who not only raved about the film but told me about it's dark edge. I was instantly intrigued and had to chase down a chance to see the film sooner than later. I'm glad I did because this is just a super little film.