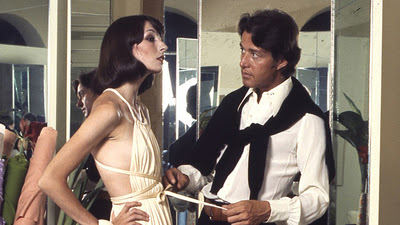 One of these days we’re going to figure out who keeps making these damned Tribeca fashion documentaries and slap some sense into them. Or at the very least, send them back to film school so they can learn how to properly conceptualize these things. Three years ago there was Andrew Rossi’s The First Monday in May (2016), essentially a 90-minute advertisement for the annual Met Gala. The next year had Sandy Chronopoulos’ House of Z (2017), a shallow hagiography of Zac Posen, and the year after that Pietra Brettkelly’s Yellow is Forbidden, a Guo Pei doc that forgot to explore the headspace and motivations driving the Chinese designer. Now 2019 has its own underwhelming Tribeca fashion doc: Frédéric Tcheng’s Halston, a film which admittedly takes larger stylistic risks than its aforementioned contemporaries but nevertheless fails to stick the landing.

The notoriously temperamental and demanding American designer Roy Halston certainly seems like fodder for a great movie: a midwest kid who conquered the world of high fashion before losing his career and the trademark to his own last name through a series of terrible business decisions and the weight of his own monstrous ego. Seemingly eager to inject his film with the same spirit of bold experimentation that rocketed Halston to greatness, Tcheng rejects many of the strictures of traditional documentary, mixing talking heads and archival footage with dramatic re-enactments and an omniscient narrator—an opening inter-title insists that while the film is a documentary, the narrator “is a fictional character”—who broods over a pile of VHS tapes of interviews and fashion shows like a femme fatale trapped in an editing room. All of this would’ve been fine, but Tcheng can’t seem to commit to these flourishes, seeming to forget that there’s a narrator for large swathes of the film.

What’s worse, Halston can’t figure out what to make of its subject, emphasizing that he was a one-of-a-kind personality, a singular genius who made American fashion chic in France while blended the lines of high and low fashion by “selling out” to JCPenny, while in the next insisting he was a fashion world Horatio Alger, a humble midwest common man. By the time we get to his death by AIDS, we realize we know less about Halston the man, not Halston the media darling or art world enfant terrible, than we did going in.