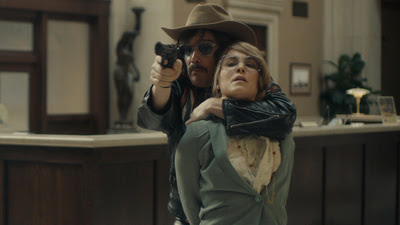 Billed as a comedy, STOCKHOLM is more humorous than funny, owing to the oddness of the actual event. The result is a very good, but sometimes off kilter viewing experience.

The plot has Ethan Hawke taking hostages in a bank with the hope of freeing his friend played by Mark Strong. Hawke's plan and demeanor is extremely odd with the result that the hostages begin to side with him as events drag out.

That the film works as well as it does is due entirely to the cast which is headed by Hawke, Strong and Noomi Rapace. They sell the whole thing, keeping it all real even as the events spin out into silly territory. The cast make you certain that this is what happened even if you're not sure if this is what happened.

...on the other hand it doesn't really matter since it all holds together and the uncertainty adding weight to a very good little film
Posted by Steve Kopian at April 09, 2019