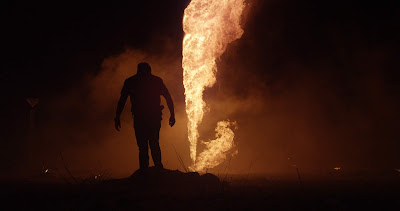 Until I saw THE GASOLINE THIEVES, I’d almost forgotten what the wow of experiencing a remarkable artist for the first time feels like. That’s how impressive director Edgar Nito’s work is here: practically every scene overwhelms with the talent on display. Whether it’s setting atmosphere or mood, crafting memorable shots, eliciting strong performers from actors young and old, or creating a compelling (and often disturbing) portrait of a country at a particular moment in history, Nito seems to be able to do it all.
And frankly, as clichéd and even patronizing as it sounds, I think his best work is still to come. One reason I’m confident about this is that the script, which he co-authored, doesn’t always match the subtlety and freshness of the filmmaking. The problem isn’t that the mix of adolescent romance and crime thriller isn’t skillfully done, but rather that the overall story trajectory, despite some nasty shocks, is pretty clear from early on. Moreover, things get more predictable at the climax, where the final shock is telegraphed to the point where it’s no longer a shock at all.
That said, THE GASOLINE THIEVES is still probably my favorite feature so far in this year’s Tribeca lineup, and it’s well worth seeing for its sheer creativity and depth of feeling.
Posted by Peter Gutierez at April 25, 2019