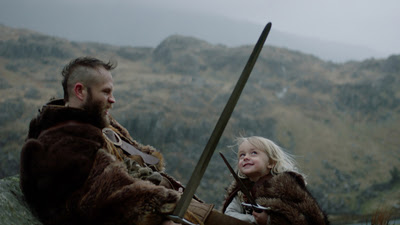 Mark Webber’s THE PLACE OF NO WORDS is a one of a kind film. If you click with it it will be one of the most profound films you will see all year. I watched it from the start with an odd look on my face wondering if Webber was doing what I think he was doing…and amazingly he was, from start to finish he was blending reality and fantasy to create something magical.

The film concerns the relationship between Mark and his three year old son Bodhi (the director and his son). We watch them in real life where Mark is dying and trying to come up with a way of explaining it to his son, and we watch them as they go on a magical quest with fairies and monsters to some far off place. The two worlds blend since the fantasy is the games the pair play made real and the thoughts that Mark is having as he ponders his life and son.

What the film is beyond that is nigh impossible to describe because anything I can say about what happens or how it looks will not do the film justice for how it plays. This is a film beyond words because the film operates in the intersection where everything comes together to make something greater than the parts. Trust me this is a film that seems like it’s this simple thing but in reality there is the complex thought and emotion behind it.

I laughed, I cried, I smiled and I walked out feeling I had actually seen something unique.

That the film works is due entirely to the interplay between the father and son. I don’t know for certain but I suspect that Webber shot a lot of footage with his son and cut it together to tell the story he wanted to tell. I say this because there is no way that any child could act the way he does. He is simply reacting and playing with his dad and we are the beneficiaries . This is a kid being a kid and it is glorious. Trust me on this you will fall in love with Bodhi and he will pull you through the film.

I don’t have words to explain how great this film is. Two weeks after I saw it is still dancing around with me, still informing me in my own place without words. Rarely has any film haunted me so.