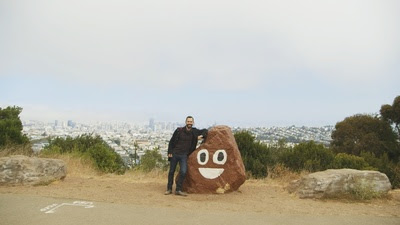 I write this review under duress. Unfortunately, my humorless editor refused to accept my original draft of 400 emojis in the place of 400 words. Doesn’t he realize that emojis are the future of language? Or at the very least, of human communication in the internet age?

Such is the debate at the center of Martha Shane and Ian Cheney’s Picture Character, a playful yet informative look on the birth, rise, and future of these omnipresent online ideograms. Derived from the Japanese words for “picture” and “character”—literally “e” + “moji”—these pictographs originated largely as simple emoticons to help express emotions via texting. From their invention in 1997 to now, they have exploded in popularity with well over 1,200 officially registered representing all manner of people, ideas, objects, animals, and emotions.

The documentary takes two different approaches to examining emojis, the first a larger linguistic consideration asking a basic, simple question: are emojis a language? From the assembled experts, the general consensus seems to be no, not yet. Languages need grammar, past/future tenses, and the ability to express complex ideas; emojis might be the perfect medium to say “I love you” but can they successfully translate Shakespeare’s Sonnet 18 or describe the biochemical reactions that spark physical and emotional attraction to medical students? But emojis might be moving in that direction, as one featured study shows wherein users of Sina Weibo—China’s response to twitter—are demonstrating simple causative grammar using arrows as pronouns and noun emojis as verbs. (According to one talking head, this is unsurprising seeing how Chinese characters could be seen as emoji precursors.)

These details will excite the scientists in the audience, but laypeople will find Picture Character entertaining for its second approach to emojis: detailing the process of how new ones are designed, pitched, and selected. It follows three teams struggling to get new emojis accepted by the byzantine and bureaucratic Unicode Consortium in Silicon Valley: a high schooler from Berlin fighting for a hijabi emoji; two Buenos Aires women arguing for a mate emoji celebrating Argentinean culture; a British nonprofit trying to approve a period emoji to help destigmatize menstruation. Reminiscent of Cristina Costantini and Darren Foster’s Science Fair (2018), the film presents them as entrees in a competition, one that will help redirect the linguistic evolution of mankind. It’s a heavy burden, but to the film’s credit, they never make it boring.