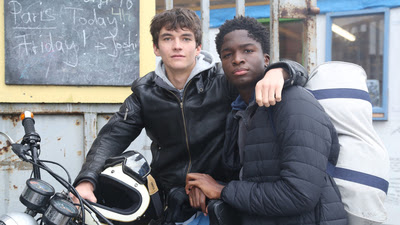 An 18 year old English boy steals his stepfather’s RV while they are on holiday in Morocco and decides to drive it to France to see his real dad. Unfortunately he doesn’t really know how to drive. Fortunately he runs across his a young migrant who has a clue and they end up falling in together to travel across North Africa and Europe.

Roads is something special. At a festival like Tribeca where there are so many slots to fill the programmers tend to fall into familiar patterns in the films they choose. ROADS doesn’t take the road well-traveled by the rest. Yes, on the face of it Roads is the sort of film Tribeca has played before but the execution is different. This excellent story of friendship, coming of age and the migrant crisis in Europe is a small gem of a film. Refusing to take the easy road at any turn the film is grand adventure about the difficult road filled with questionable choices that end up forging who we are and who we call friend. I love that some hard lessons are learned about responsibility and friendship. Mostly I loved that we really can’t predict how this is going to play out. There was a point about half way in when I suddenly realized that I had no idea where the film was going. Yes it had hit some of the expected peaks but mostly this was taking its own path.

This is manna from heaven for any film goer.