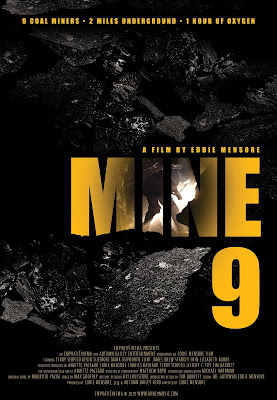 Eddie Mensore’s MINE 9 is a must see thriller about men tapped two miles underground with only an hour of oxygen left before certain death. Not only is it a frightening thriller, scarier than most recent horror films but it also acts as a wake up call for anyone who doesn't fully comprehend the dangers of coal mining.

The film tells the story of a group of miners in a productive mine that is short on everything. They don't have an escape team  and the foreman above ground is sick. Worse their equipment is in need of repair, especially the pump that is keeping the place from filling with water. The mine manager just wants them to keep going because at some point the company will take care of all the work orders she has been sending in when they can. One night after a shift almost goes wrong they decide to wait in calling in the Feds. They all need the money. The next night despite knowing the amount of methane in the mine is on the increase, and still having safety concerns,  the men go back down unaware that they soon will be  fighting for their lives. 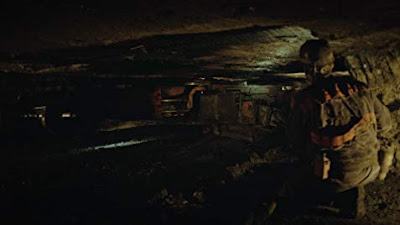 Moving and looking unlike anything that a major Hollywood studio would turn out MINE 9 is a deep dark claustrophobic thriller about men in crisis. Feeling incredibly real from the very first frame this film will put you on the edge of your seat and keep you there until the very end.  Shot in a real mine with mostly practical effects there is a tactile quality to it all. We can feel the dirt, we smell the stale air and sense the danger. Once things begin to happen there is almost no music simply the sound the men and the rocks and machines. There is nothing to distance us from what we are seeing. There are no big name actors to act as a hero so we don't know what the hell is going to happen. Death is not spectacular but painful and tragic. Minds and bodies are broken. Blood when it comes, can't always be seen for all the dirt. 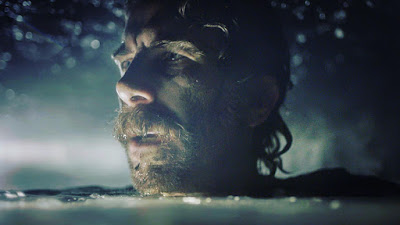 What I love about this film is it feels like Mensore found out what would really happen in a situation like this and did exactly that, not what would look good on the big screen or be easiest. Its all dirt and water and pain.Some scenes are dark. Some are confused. People behave as people behave in real life, some rise up, some are broken and heroism doesn't have a thunderous score.  It is an anti-Hollywood film and we are so much better for it.

I was rocked by this film. It gripped me more than almost any film in the last year or so.

You have to see this film because it is one of the best thrillers of 2019. 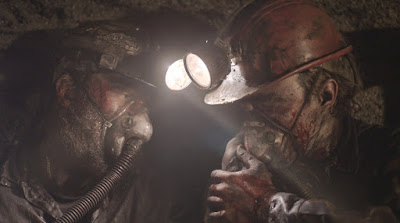