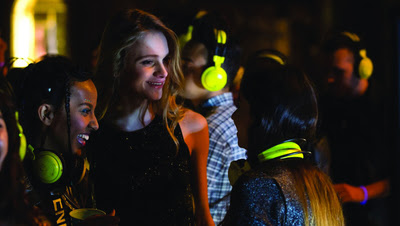 Eden, a teenage trans woman recently started a new school. She moved with her family after there were problems at last school she attended. She is beginning to make friends and watch as the kids in the school begin to make dates for the upcoming prom. The three young ladies try to get by in the clicheish school and hopefully find their own dates for the big dance.

Odd coming of age tale has much that I like and much that I don't with the result the film isn't quite my cup of tea. Part of it is I can't really relate to the tale of teens looking for acceptance based on superficial reasons (the size of a girl's breasts). Is society this vapid? Apparently. The other part of the problem is that the film wanders into an unexpected place,  the girls get involved with the notion of donating a kidney in exchange for cash and plastic surgery.  It a weird digression that feels out of place in a film that, when it works is a killer coming of age film about friendship.

While some at the screening loved the film I was less in love with it and it's digressions. (Though I did love the techno score)

While not bad, it never comes together even if the final ten or fifteen minutes is good and an indication of what the film might have been had it not gotten lost in one of the former Russian Republics.
Posted by Steve Kopian at April 29, 2019