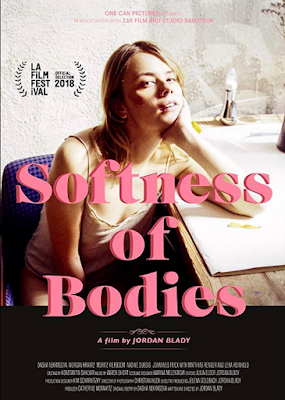 A young American woman striving to be a great poet has moved to Berlin in the hope of making her dreams come true. As she write poems, shoplifts her romantic life becomes complicated with the arrival of an old boyfriend.

THE SOFTNESS OF BODIES is a tricky film. Structured so as to be in the moment, we are forced to try and keep up and make sense of all the the characters, without any attempt to explain who these people are other than as what we see before us. On some level it is very realistic and lifelike but at the same time it is disorienting for audiences used to being told a tad more about a character than just what we see. It can be off putting. I mention it because for a good portion of the film I didn't know what to make of Dasha Nekrasova's main character. An often snide young woman we have to be with her for a while before we can really begin to like her.

The film is the same way, we need to sit with it before we can fully know if it is good or bad. SOFT BODIES is a film with its own point of view the film challenges out expectations about what a comedy or drama or romance should be. There are characters we don't like, others that seem to be ciphers because we simply don't know enough. But over time, for the patient  audience member the film slowly comes together into a one of kind film experience.

That may sound like a back handed compliment, but it's not. It is in fact a statement of truth. When I stated the film I didn't care for it much. I didn't like Nekrasova's poet and I seriously considered turning the film off and walking away. I didn't do it, partly because the film is only a brief 75 minutes, but more because I began to warm to what the film was doing. I begin to like some of the characters and I was curious how things were going to play out, which is always a sign of a good film. (I also was really enjoying a view of Berlin we never see in any film or TV show)

Do I love the film? Not so much love as like. I liked it enough to to stay to the end. I like it enough that I can honestly recommend it to anyone sick of your typical Hollywood or Inde film fare. There is something here that for the person who truly loves all films will enjoy.