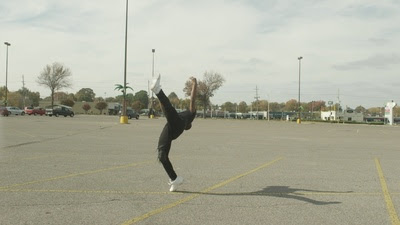 I watched much of the first half of LIL BUCK; REAL SWAN not having any idea what I was watching. I was so confused that I thought either I had been sent the wrong film or that I had somehow skipped the screener ten minutes into the film. Neither was the case, I was indeed watching a biography of Charles “Lil Buck” Riley. Just short of the half way point the film comes together and I knew where I was, I still had no idea about the road that got me there but I was finally there.

LIL BUCK is the story of Riley whose dancing took him from the parking lots and the roller rinks of Memphis to world-wide acclaim. His ability to dance to anything is truly amazing and his skill rightly has taken him all over the world.

While the second half of the film is excellent the first half of the film doesn’t really work. The problem is that the film drops us into the joking world of Memphis with zero explanation. There is no context, it simply assumes we know what they are talking about. It’s a major mistake that kept me distant from the film.

It begins with the Golden Palace skate rink and talks about roller skating and dancing with no indication of why this is important. Worse it doesn’t really clue us into Lil Buck or any of the other people who are talking. They are nameless people talking about things which mean the world to them but which as an outsider doesn’t mean anything. It’s like listening to a conversation at the next table at a diner and having no idea wat is being discussed. In retrospect the problem is even worse since there doesn’t really seem to be a reason why the section runs 35 or so minutes other than to show us the dancing.

To be perfectly honest if the film was restructured so that context was added and it was tightened so it wasn’t just people dancing this would be a truly great film. Hell the second half is close to that now.

Should you see the film? If you like the dancing and can forgive the first half yes.
Posted by Steve Kopian at April 30, 2019