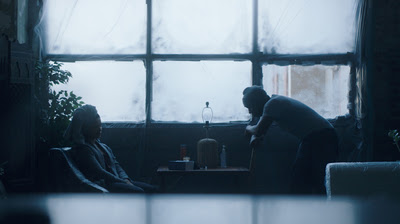 About ten years ago, director Takashi Doscher and his future wife went on a five-week road trip across the United States, criss-crossing the continent, camping, climbing, and hiking as they went. Both enchanted and repulsed by their frequent isolation, Doscher wrote a screenplay he hoped would reflect the experience. It too focused on a couple fleeing into the wilderness, but over the next four years the story grew to global proportions. Literally.

His new film Once, the product of that road trip, is set in a world stricken by a mysterious pandemic that kills women in a matter of days. Exactly 400 days after the plague first hits, two lovers, Will (Leslie Odom, Jr.) and Eva (Freida Pinto), leave their hermetically-sealed apartment-cum-quarantine for the wilderness. Despite their best efforts, Eva contracted the disease and, with less than a week to live, she makes Will take her to a state park so they can visit a waterfall from their past.

It’s a film of many virtues but one near fatal flaw. First, the virtues. Sci-fi stories about a suddenly barren humanity facing extinction are nothing new—Brian K. Vaughan and Pia Guerra’s comic book series Y: The Last Man (2002-2008) and Alfonso Caurón’s Children of Men (2006) stand as the sub-genre’s exemplars—but Doscher proves himself a deft hand at world-building. Despite a few requisite GoPro shots of digitally edited cityscapes, Doscher limits his views of the apocalypse from Will and Eva’s perspective, shooting almost entirely in medium shots or close-ups with them either in the mid or foreground. We get only snatches of the world outside their apartment or minivan: reports of a mysterious comet, whispers of a government “repopulation” program, radio warblings of nascent doomsday cults, chat rooms for surviving women with dwindling user bases. The non-linear storytelling might prove frustrating at first, but by the third act it pays incredible emotional dividends.

Now, the crippling fault. Despite essentially being a tragic meditation on the selfishness and salvation of romance with a heart-breaking twist ending, Doscher made the mistake of shooting it as a thriller, adding an eye-rolling cat-and-mouse chase in the last thirty minutes between Eva and Will and a father/son duo who hunt women. It’s predictable, annoying, unnecessary. If Doscher edited out the thriller parts, he’d have an eighty minute triumph.