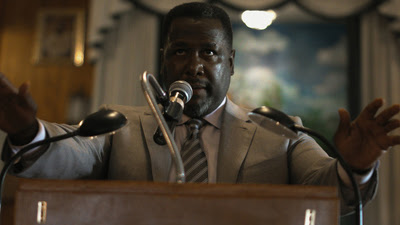 Before I start to talk about the film I have to talk about how the film was being sold to the public. The work of Phillip Youmans the film was written when he was 16, shot when he was 18 and hitting the festival circuit at 19. There seems to be an assumption that we should take this into account in looking at the film. While it would explain why some of the film is as it is, it doesn’t give it any leeway as to whether I like the film or not. I cannot and will not give the film a pass because of his age, largely because I’ve seen several films by similarly aged filmmakers which made no excuses and hit it out of the park. The only difference is they couldn’t afford to market their films in such a way to get it into Tribeca. Just because the film was made by a teenager doesn’t mean anything when you are at a festival such as Tribeca. As such what follows is the exact review I would have written had Youman’s been ten years or more older.

Burning Cane looks to be the calling card of a filmmakers who should, in a few years’ time be force to reckoned with. A beautiful film it shows great promise and will probably be looked at as the first feature of a director of name. Unfortunately it’s not really a film I can recommend to anyone.

The film is largely the story of three people. Helen who is concerned about her dog which seems to be dying. Her son, an unemployed salesman tasked with watching his son while his wife works and a minister troubled by a dwindling flock and martial problem. All drink heavily and smoke more than would ever be healthy.

It is told in long monologs and longer silences mixed with some stunning images. It is the work of a filmmaker of great skill and technique and I will be curious what Youman’s will do down the road and I fully expect that down the road he will be a force in film….

…first he has to learn how to tell a story and create characters.

One of the big problems with the film is that this is a short film or several short films stretched to 80 minutes. While the long pauses where we watch life would be fine in a documentary but there are only so many scenes where someone sits and smokes, or drinks we can watch without getting bored. I understand that these are the lives of people going nowhere, but there has to be a reason to watch. This is not a verite documentary. Events don’t transpire on screen but off. We are often told what happens in long flowery monologues that, while stunning short stories are out of place in a film such as this. The major events, while hinted at, all take place off screen. If you lost an hour of this film it would be a killer short.

The biggest problem is the characters don’t make sense. Part of the reason is that we really don’t know enough about them for their actions to make sense. Why is Helen all over the place? She is loving one minute and a bitch in the second part of the film. The turning on a dime makes no sense. We don’t know what leads up to her final act. Additionally we don’t know enough about the minister to know why he would tell her to keep things within the family. Who are these people? We really don’t know. This lack of information surrounding them might have worked in short film where we accept not knowing because of time constraints but not in a feature film. We need to know more. We need a real sense of the characters beyond their scenes and it isn’t there. And the thing is its clear the characters know these people and so does Youman’s but he never puts it on the screen. They know who they all are but we don’t.

Sitting in the screening room when the film ended I was struck by the sense that I was watching perhaps the emergence of a great filmmaker. Youman’s is a man who has the technical skill to put images together to create mood but he needs to learn to tell a story, and he needs to live a bit more so that he can create lived in characters that bleed off the screen.

A miss, recommended only for those wanting to get on the ground floor of a future award winner but not for anyone wanting a satisfying film.
Posted by Steve Kopian at April 27, 2019