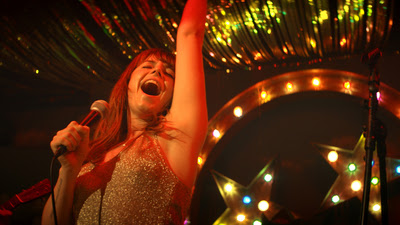 Wild Rose takes place in Glasgow. Rose-Lynn has just been released from jail, after serving 12 months, and is leaving with an ankle monitor. As she was leaving, the other inmates say she was going to be the next Dolly Parton. Her first stop out of jail, is to have sex with some guy, followed by her going to her mom's home, who has been taking care of her two children during her jail time.The boy is excited to see her, but the daughter doesn't say a word.

Rose-Lynn wants to go to Nashville to be a Country star, her mom tells her she's living in a fantasy, and needs to go to college, and get a job. Her mom, (played by Julie Walters, whose performance I really enjoyed), gets her a cleaning job at a fancy home, for Susannah. One day Susannah's kids overhear Rose-Lynn singing. The next day Susannah says her kids can't stop talking about her voice, and pushes her to record herself singing to try to get it in the hands of someone on the BBC. Rose-Lynn quickly becomes Susannah's mission. She really believes in her, and is excited and wants to help make her dreams come true. In the meantime, she is a mess of a mom to her own kids. She promises to take them out for pizza, but forgets and goes out drinking. She's selfish, and reckless.

Wild Rose was entertaining. While I don't like country music at all, and didn't enjoy the times when it was the background music, I really liked the scenes when Rose sang. She has a great voice! The film didn't have the predictable fairy tale ending that I imagined. The accents weren't hard to understand overall, but I found it a bit difficult to understand when the kids spoke.

Does Rose-Lynn leave her kids, and become a star in Nashville? Go see it for yourself to find out. Recommended.
Posted by Steve Kopian at April 30, 2019