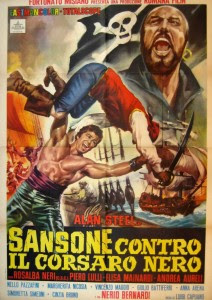 Mash up of the peplum and pirate genres has Hercules (or Samson depending on the dub) battling pirates as part of the Royal army. When he is then set up by the evil Rodrigo he is thrown out of the army. Rodrigo then conspires with the Black Pirate to eliminate the hero once and for all.

Rip roaring action film is a great way to spend a rainy night on the couch.  Full of good good guys and bad bad guys this is a film where you can boo and cheer depending upon who as the upper hand.

At a time when the sword and sandal craze was chugging along some producers wanted to spice things up and setting the action in another time period was often a way to do it. Some times it works and some times it didn't. Here it does. Frankly if star Alan Steel didn't end up with a torn shirt that makes him look like Hercules or one of the other ancient muscle men you couldn't call this swords and sandal film.

This film is a lot of fun and highly recommended.
Posted by Steve Kopian at April 21, 2019