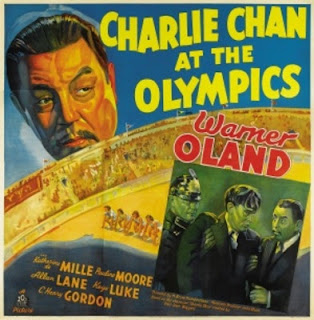 If you view the Chan films in order there is actually a weird around the world trip that happens. Its almost as if Chan is moving from place to place in one trip. Its clear from the internal details that time has passed between adventures, but at the same time its as if Chan is taking the long way home to Hawaii.

This stop is in Germany where Chan is visiting his son who is on the US Olympic team during the infamous Berlin Games. Chan is sucked into the mystery as a favor to one police organization or another, since at this point in the series he was still a detective with the Honolulu police force.

Amazingly watching the film one loses ones self in the mystery (which has to do with the theft of a military guidance system) and completely forgets the darkness that would devour the world. Here the Nazi's are the good guys, almost comedicly so.

One of the better Chan films is most certainly worth a bag of popcorn and a glass of soda.
Posted by Steve Kopian at April 14, 2019