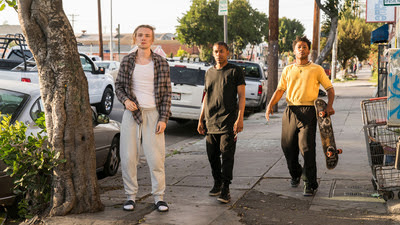 I went to the world premiere of Gully last night. Gully is a movie about three close friends; Jessie, Calvin & Nicky living in the projects of LA. Their days consist of causing trouble, drinking and doing drugs, and playing video games. One day, they decide to make their violent video games, into a reality. They beat some guys up, and steal their car. There is a lot of violence throughout the film that was hard to watch. At first you wonder "what the hell is wrong with these kids?". Soon, we find out their individual stories of trauma in their childhood, that impacted who they are today.

I don't want to give anything away since that's a big part of the movie. Gully is a story of how trauma affected these boys. It's a very heavy, and intense film. Depressing too. Just when you think you know what's going to happen, something awful happens next, and wondering the fate of these boys will give you anxiety.

After the film, at the Q&A, the writer, Marcus J. Guillory, said he took stories from real life, from his observations, and from speaking to kids. He said these are the stories of the daily lives that you won't see on the news, but are more common than you think, and he wanted to give them a voice.