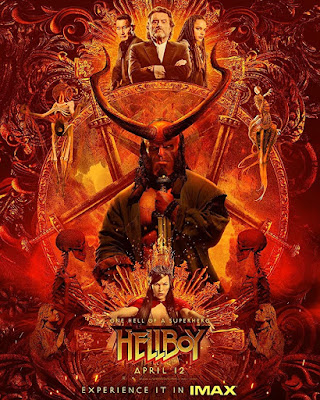 Eleven years and a falling out between creators later Hellboy returns to the big screen in a film that part reboot and stand alone adventure.

Hellboy is drawn into the battle again Nimue, The Blood Queen who centuries before had tried to wipe out mankind so monsters could rule the world. Dismembered and spread across the English Isles by King Arthur The Blood Queen,  finds a willing servant in a changeling who wants revenge on Hellboy. With his help the Queen collects her body parts and tries to bring about the end of mankind, hoping to make Hellboy her king, even if it means bringing about the apocalypse.

Jokier, bloodier and more foul mouthed than the films directed by Guillermo Del Toro this new film has been reviled by critics across the board. I'm not sure why. Once you get past that the film doesn't quite have the weight of the earlier film, and you allow for uneven effects and a couple of bumps at the start, this new take proves itself to be a great deal of fun.

Is it high art? No but it it is entertaining and I laughed my ass off all through it. It is another person's take on a a well loved character. Yes David Harbour's reading of the character is damn close to  Ron Pearlman's at times but there is a bit more silliness to the reading which off sets things nicely. Best of all it has some truly amazing monsters in it especially those which rise up from hell at the end. (They are freaking awesome because they don't look like any other movie monster)

I'm not going to say that the film is remotely perfect some of the jokes kind of fall flat, a bit of the plotting is a tad bumpy, and as I said the effects are hit or miss but this is far from the disaster that some people would have you believe. Frankly I think this is going to be one of those films where when people see it on Netflix or cable they fall in love with it.

I had a grand time watching the film and I happily chomped on my popcorn and soda in a near empty theater, laughing and cheering from start to finish.

And I am saddened to think that there probably won't be a sequel.
Posted by Steve Kopian at April 21, 2019