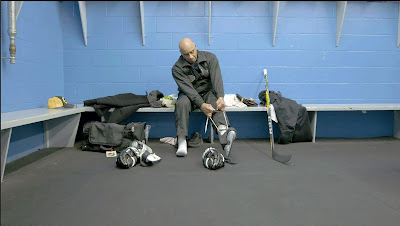 This a portrait of Willie O’Ree the first black man to play in the NHL and who helped to break the color barrier in the not just hockey but other sports as well.

A well-made and loving portrait of a Hall of Fame player covers not only cover O’Ree’s life (He may have only played in the NHL for one season but he still played the game professionally for almost 30 years) but also deals with the problem of racism in hockey and sports. We hear stories those that have followed in O’Ree’s footsteps and we see how the racism, and sexism that once plagued the sport is being beaten back by new generations of players.

Hitting all the expected points the film does exactly what you’d expect from a film like this. While in most cases that would be a kiss of death, here it is perfectly fine because taking the expected path introduces us to a whole slew of wonderful people, friends of O’Ree and the those influenced by him. Had it taken a less conventional approach we might have missed spending time with everyone who hold O’Ree in such high regard.

I had a smile on my face the whole time. O’Ree makes an impression on you. He tells the story of his meeting with Jackie Robinson. When O’Ree was a kid he met Robinson for the first time in 1949 and told him that he played hockey. In 1962 he met Robinson again and Robinson asked him if he was the same person he had met over a decade earlier.

A solid portrait of a great man WILLIE is recommended
Posted by Steve Kopian at April 27, 2019