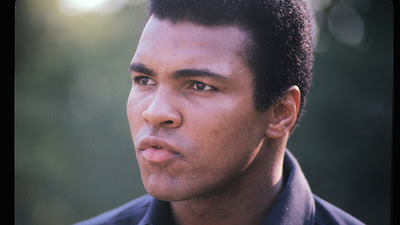 Do we really need more Muhammad Ali documentaries at this point?

There are already so many of them, each examining different, unique elements of his career and legacy, that eventually future filmmakers, in the manner of Jorge Luis Borges’ On Exactitude in Science, will have nothing left to do but combine all the existing ones into a single 74-year long maxi-film recounting his life in real-time.

But apparently nobody told Antoine Fuqua, as his new two-part documentary What’s My Name: Muhammad Ali seems determined to be the Ali documentary, one totally comprehensive in its scope and self-assured in its import. Told exclusively through archival footage and interviews, the film ostensibly seeks to let Ali posthumously tell his own story. This is less a challenge than one might think, as the notoriously loud-mouthed Ali spent so much of his life giving interviews that there’s scarcely a moment in the film’s nearly three-hour runtime where he isn’t narrating or commenting on this and that.

The first part is predictable sports hero worship, playing softball with his youthful triumphs as a Golden Gloves champion, Olympic medalist, and underdog heavyweight champion after an upset victory against then-champion Sonny Liston. Particular care is given to the invention of his brash, trash-talking “People’s Champion” persona as well as his conversion to Islam and the adoption of his new name Muhammad Ali. It’s only in the second part of the film that it starts too feel like an original take on Ali’s career, being concerned primarily with his failures: his loss to Leon Spinks in 1978, his humiliating attempts to reclaim his title from fighters half his age, his medically-necessitated retirement, his struggles with Parkinson’s and a bizarre form of narcolepsy.

Yet Fuqua ultimately chickens out, refusing to explore his money issues, tumultuous private life, and his long-suppurating post-career feud with Frazier. Fuqua’s much more interested in the puff piece parts of his later life, the diplomatic missions and special public appearances like at the 1996 Olympics opening ceremony. Here’s the film’s central failing: Fuqua proves too much of a fan, too much of a true believer in the Muhammad Ali myth to give a comprehensive accounting of his life. By the end, we feel like we’ve witnessed an enthusiastic college seminar on Ali, but not a proper exploration of the fallible human being himself.