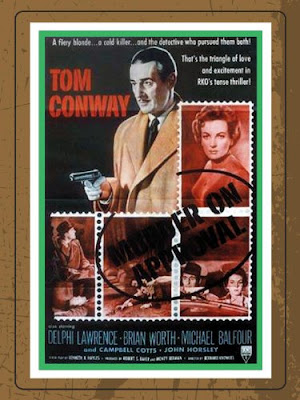 Murder on Approval is surprisingly entertaining trifle starring Tom Conway as Tom Martin, a troubleshootin PI who isn’t particularly liked by the English police. He is so disliked that they don’t threaten him with locking him up but throwing him out of the country completely. Conway’s Martin has been hired by a rich stamp collector to get to the bottom of why a one of kind stamp he just bought is also in the collection of a fellow collector. The trail takes him from New York to England where Martin’s client supposedly purchased the real deal from the agent for the estate of a recently deceased man. It quickly transpires that the stamp is still in the estate and forgeries are floating around that are almost as perfect as the real ones.

A neat little mystery/thriller that is good for what ails you crime drama. Echoing the programmers that came out of Hollywood in the 30’s and 40’s, this is kind of like The Falcon or Bulldog Drummond was a few year older and actually worked for a living. Martin’s fees of 10 grand would be the equivalent of 100 grand today and it puts him at danger at every turn. This appears to have been an attempt to start a new series with Conway, with the actor and the character appearing in one more film called Breakaway (which I have to track down.)

If you love the classic series like The Saint, The Falcon, Bulldog Drummond and the others then Murder on Approval is for you. Its also worth a look if you just like smart thrillers with great repartee. Highly recommended 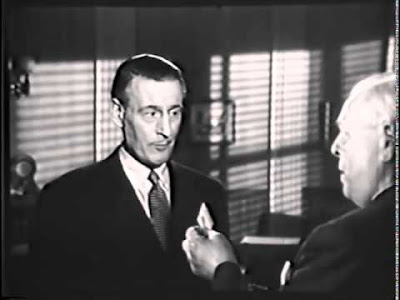