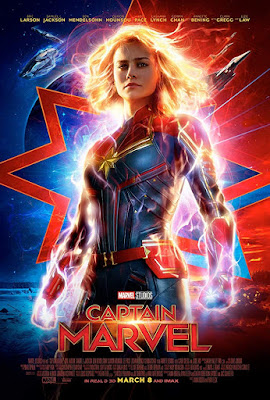 The Carol Danvers story comes to the big screen just in time to make her a major player for the next Avengers film. It’s a solid film that entertains pretty much from start to finish.

The story had Carol Danvers going through her paces as a Kree soldier. Severely wounded six years earlier, she has no memory of what her life before was (including that she is from earth). Chasing a group of Skrulls to earth where they think an energy source which could power a faster than light ship resides. Teaming  with Nick Fury she fights the bad guys and reclaims her past.

A matter of fact origin story is enlivened by a killer cast, a couple of neat twists and witty repartee between Danvers and Fury. At its most basic level there is nothing new here but it is really a hell of a lot of fun. The problem here is that the film can’t really go its own way but has to fit into the run up of Avengers. What I want to see is the next film when Danvers will be able to, hopefully, do something truly spectacular and not end on a note that sets up a movie three months later.

Regardless of my questions Captain marvel is recommended.
Posted by Steve Kopian at April 20, 2019