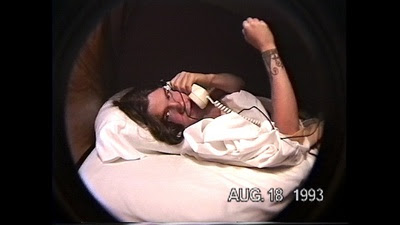 It’s a cruel irony that 90s alt-rock band Blind Melon will perhaps always be remembered for one of their least characteristic songs. Their 1993 hit “No Rain,” a mellow, wispy psychedelic ballad made famous by Samuel Bayer’s music video starring a young girl dressed as a tap-dancing bee, became one of the most ubiquitous one-hit wonders of the decade; soft enough for the adult contemporary crowd yet bluesy enough for rock fans, it’s survived almost three decades of continuous rotation on nearly every radio station featuring white people playing guitars. But casual listeners might be shocked by concert footage of the band from the mid 90s before lead singer Shannon Hoon’s unexpected overdose in 1995—more Alice in Chains than Hootie & the Blowfish, they played an at times punishing folk/grunge hybrid wallowing in misery and religious symbolism.

Hoon himself was as much Gen X martyr as Kurt Cobain, emptying himself of his fears, self-hatreds, and anxieties while slowly self-destructing both on and off stage. Much like Cobain, Hoon kept a diary through his active years as a musician. But whereas Cobain’s was a physical journal, Hoon’s took the form of a collection of Hi-8 footage in a sprawling home-video archive shot from 1990 to 1995.

In All I Can Say, filmmakers Danny Clinch, Taryn Gould, and Colleen Hennessy curate this footage into a portrait of depression, loneliness, and Clinton-era ennui. We watch as he escapes a dead-end life of blue-collar drudgery in rural Indiana for sunny Los Angeles, forming a band of like-minded musicians who make such an immediate impression they get a record deal with Tower Records while only having five recorded songs. The joy of their success deteriorates as they begin an endless succession of touring, interviews, video shoots, and recording sessions, their soft-spoken lead singer devolving into a drug-fueled mess, doing smack and LSD before shows, urinating on concert crowds, and running around onstage naked.

The footage reveals a pained introvert, one who talked to his camera directly as a confessor, confidant, and conspirator. He was a man of deep feelings, equally affected by witnessing the aftermath of a young woman’s suicide after a show as the news of Jerry Garcia’s death. Both elegy and unintentional farwell letter, the film is one of the most devastating archival collages playing this year’s Tribeca festival.