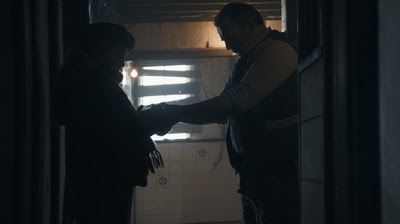 A father prepares his daughter for an upcoming tragedy via and electromagnetic pulse by giving her five years of food and a set of rules to live by, one of which is "Never Leave" the house.

Odd ball science fiction film feels strangely incomplete. This is the middle of a story not a whole one and it as a result it isn't quite right. Don't get me wrong, this is not a bad film, but there are way too many questions and the world doesn't wholly make sense to fully give one's self over to it. Then again some of the problems are explained away by a series of ending shots that kind of make the rest of the film worth seeing.(Though I'm still pondering if it's too little too late)

In all seriousness the end of the film, which I won't reveal, has some of my favorite images in probably the last decade of cinema going. I'm not sure if I want a better film that leads up to it or a film that continues from it, assuming of course it remains that damn cool.

Worth a look for science fiction fans.
Posted by Steve Kopian at April 30, 2019