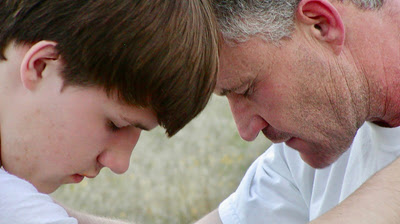 This is going to be a two part review. There is a basic feeling about the film followed by some further comments.

The Tribeca write up for Daniel Karslake's documentary FOR THEY KNOW NOT WHAT THEY DO specifically mentions that the film concerns how the Marriage Equality Act put gay and trans kids into the crosshairs of the religious right but that is totally not the case. While the Act is mentioned but it isn't the focus of the film since the stories related were in motion well before that. Additionally while the religion plays a part in how the families react to their children it does not seem in three of the cases to be an over riding factor.  I mention this at the top because I went in expecting one film and got another one almost entirely.

The film is the profiles of four families and their stories of what happened when one of their members came out as gay or trans. There is the Robertson Family, a deeply evangelical family whose son was tormented by his being gay and tried to make sure god loved him by going so far as to try conversion therapy. The McBride family whose daughter who made headlines by announcing her identity in a an address at college while class president. The Baez family whose son's story took him to the Pulse night club. And there is Borcher family who struggle with how to handle their son's announcement he is trans.

Often moving, surprisingly hopeful FOR THEY KNOW NOT is a very good film that needs to be seen and shown to families who don't know what to do and to kids who are afraid. The film is a ray of hope for everyone and should be seen.

And if you want the capsule review leave now and don't read further. I say this because as good and vital as the film is there are some problems with it that prevent it from being as truly great as it should be. While I would like to not mention the things that bothered me I really can't because I think this film could be and should be even better.

The first problem with the film is that there really isn't a flow between the stories. The film seems to move between them almost randomly and it never quite builds to anything. The result is the stories are also unbalanced with some carrying more weight than others. This film should have had a deeper emotional punch from accumulated weight of it all and not just a series of moments.

The other problem is that there some things that are just sort of left hanging. We should get to know more about Sarah McBrides's husband, more so since he too was trans, but he remains a kind of cipher. We should know more so we feel more. Additionally there are several talking heads in the film, but we never get sense of why we are talking to them. Yes, some are clergy, but why did director Karslake choose them? Why doesn't he mention that one of them was a big donor to the infamous Exodus foundation until the very end? Yes, yes he changed his mind about the organization but there are threads there, similarly concerning the other official interviewed that should have been explored. As good as the film is,it needs more information to be great.

Reservations or no, this is still an important film that shows not all parents are monsters and that change can come.