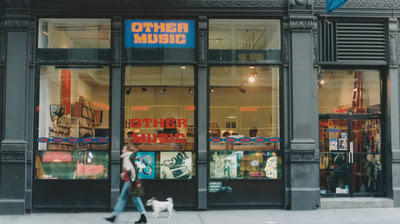 The final days of the legendary New York record Store Other Music are recalled in this bittersweet documentary about a place where you would go if you wanted to get some great music.

Founded by some guys who jumped ship from the long gone Kim's Video Other Music was always a bit off center. Opened literally across the street from Tower Records, when they were the biggest game in town, the store found it's clientele via a kick ass selection, excellent staff and the frequent live performance. Many of today's big acts (St Vincent, Vampire Weekend to name two)  performed their live giving fans a chance to see them up close and personal. Many more famous people shopped there.

A good but not great film, OTHER MUSIC is a little too nostalgic look at the store. While this is the result of everyone waxing poetic during the final six weeks the film documents, it kind of loses momentum about half way in. Too many of the same sort of stories are being told and even with the infusion of musical performances in the second half the film kind of plateaus.

I will say that part of feelings toward the film is the result of slight disappointment. Other Music, while not a place I went to with any regularity it was a place of myth and legend and wonder and I wanted the film to reflect that. I know some of how I felt is the result of my baggage which the film couldn't quite get me to put away.

Regardless this is a solid look at a sadly gone institution. Recommended more so for anyone who ever shopped there.
Posted by Steve Kopian at April 27, 2019