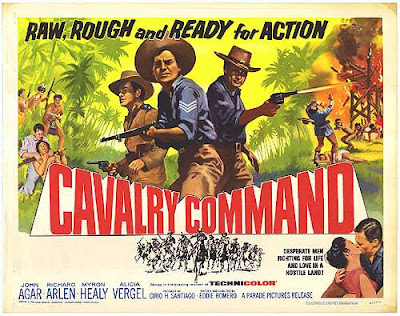 1902 in the Philippines, a group of American Calvary soldiers are dispatched to a small town in the Philippines to make friends and to put down the local uprising. Slowly they begin to win over the people in the town, however one of the rebels refuses to give up even though he sees the changes being made in the town.

More drama than action film, there are two maybe three action sequences in the film, this is a film more about bridging cultures. Will the people see the soldiers are only their for their own good? Will the rebel give up his fight? You'll have to watch the film and see.

Watching the film I kind of thought that this would have been made during the height of the Vietnam War since the whole thing plays as is it was made to pacify an occupied country. While the US was involved in the war in 1959 it wasn't at maximum boil and a film like this probably wasn't needed as propaganda. Then again one never knows...

Unevenly acted thanks to the hit or miss acting ability of the Filipino actors and actresses this still manages to covey sense of being real people trying to come to terms with an occupation. While seeming to drift into exploitation territory with its run of the mill plot points, it still has some powerful moments such as the soldier going to meet the family of a woman who was nursing him, and to whom he's lost his heart. There is something about his not being able to deal with the poverty in which they live that breaks the heart.

I liked this movie. It was a nice change of pace. Once you get past the notion that the title makes you think this is an action film it's pretty good.

Worth a look for those wanting a change of pace.
Posted by Steve Kopian at April 24, 2019