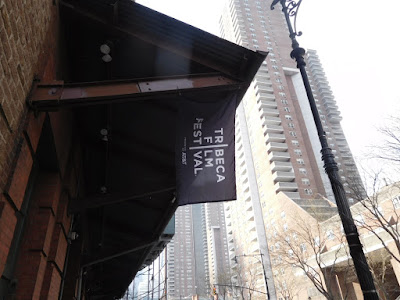 As this posts the start of 2019 edition of the Tribeca Film Festival is mere hours away. It all begins with a screening of a film about the legendary Apollo Theater at the Apollo Theater before marching straight on until May 5th. Over the 12 days of the festival 111 feature films, plus almost 200 more short films, TV shows and VR experiences will unfold literally across New York. Stretching from Apollo in the North to the Regal Cinemas in the south, and from The Village East Cinemas in the East and the SVA theater in the West, Trbeca is going to blanket the city with cinematic goodness.

And needless to say Unseen Films will be covering a good chunk of it. Unless you have a full team of a dozen people it isn’t possible to cover it all, but we are going to give it our best shot. And with the group I’ve assembled we are going to give the fest a run for its money. If you want proof consider over the last four weeks we’ve seen over half of the feature films and a good number of the shorts. This year’s team involves myself, Ariela Rubin, the infamous Nate Hood, the international man of mystery Peter Guiterrez and the one and only Joe "JB" Bendel. Between all of us you’ll get a wide variety of range of impressions on as many films as you can stand.

While we have seen a wide variety of films I don’t think that any of us has full grasped what sort of year this is going to be. Normally by this time and after this many films you have a sense of the fest. This year that hasn't happened. The films we’ve seen have run the gamut from docs to feature to comedies to horror to dramas to everything in between. Some have been certain to end up on our best of the year lists while others are best not spoken about—but we will talk about them and everything between the best and worst.

We’ll be wading into the talks (Guillermo Del Toro, DeNiro/Scorsese) , the concerts (Spinal Tap, Sheryl Crowe) and the World Premieres (LINDA RONSTADT and YESTERDAY) plus interviews and whatever else runs across our path. It will all be reported on.

Okay enough of the schmoozing what you want to know is what’s on the Unseen Films MUST SEE LIST. Well I’ve asked the team what have they loved got back to me with the following films.

ASK DR RUTH is a film that delighted everyone who has seen it. The portrait of the sex expert and human dynamo Dr Ruth Westhiemer was the one film that Ariela insisted that had to be on the list of must sees.  She loved the film so much that she beat me up after the pre-fest screening to make sure that she got to review it.

MOMSTER
Shorts that attempt to cover a lot of ground can feel formless or disjointed, but not so Drew Denny’s “proof of concept” for her second narrative feature. Encompassing two or three different genres, and several shifts in tone, MOMSTER is an engaging tidbit that makes you want more. (And let’s not forget that it also boasts an appearance by the legendary Amanda Plummer.)

SCHEME BIRDS
Consistently affecting, this Scotland-set coming-of-age documentary somehow manages to be both lyrical and gritty. Kudos, and more, are due Directors Ellen Fiske and Ellinor Hallin. Tip: If you can, catch this along with RED, WHITE & WASTED (see below); in their subject matter, and even their specifics, they share some striking parallels, serving as effective companion pieces to each other.

HUNTING SEASON
Accomplished in just about every sense, HUNTING SEASON blends the polished and the pulpy to achieve a satisfying result. What’s more, the efficiency with which this short builds atmosphere and a sense of mystery is quite impressive. In sum, a real treat.

SLAY THE DRAGON
All too often, topical docs can seem dated after a few years, but I’m guessing that won’t happen in this case. That’s because the approach here expertly balances the alarming details of gerrymandering with the even more dismaying bigger picture of how it impacts a range of political issues. Still, SLAY THE DRAGON doesn’t leave one feeling completely defeated, but rather, as the title implies, provides hope—and a practical blueprint—for prevailing over the monstrous.

RED, WHITE & WASTED
Over the years Tribeca has excelled at presenting this kind of portrait-of-America, and this may well be a highlight of that tradition. Moving nimbly between the touching, the depressing, and the quietly horrifying, RED, WHITE & WASTED is beautifully crafted regardless of what point it happens to occupy on its emotional spectrum. An eye-opening must-see that speaks to this moment in U.S. social history. (Disclosure: The consulting producer, Ryland Aldrich, has been one of my editors for many years.)

My personal choices for must sees are:

I had MAIDEN, the story of Tracy Edwards run at the Whitbread Round the World Race was on my Best of 2018 list. I love the film so much I have been flogging it since I saw if for the Camden International Film Festival last year.  That a simply told tale can reduce it's audience to tears (I'm told  a recent critics screening left everyone sniffling) is a testament to what a great story this is. I can't recommend this film enough. (And I am interviewing Ms Edwards so keep an eye out for that)

After the pre-fest screening of GAY CHORUS DEEP SOUTH a friend walked up to me, sighed and said “That maybe THE film of the festival” Probably. And I would add one of the best of 2019. The one thing I can say say for certain about this film about the San Francisco Gay Men's Chorus  is bring tissues because you will cry all over the place as people reconnect with family and fight the hate that drove them to leave the South.

A PLACE WITH NO WORDS rocked my world. The story of a father trying to explain where we go when we die both in real life and in a role playing game is both pretentious and profound at the same time and resulted in one of the most moving evenings I've had at the movies. I know some of you will not like it, but even so I am certain you will feel you've seen something greater than the typical day at the movies.

If you see THE NEIGHBORS' WINDOW stay with it until the end. This story of people watching life across the street doesn't seem like much until it suddenly is deeply moving. This is as close to a perfect short as you can get.

There are more great films at the festival but these should be enough to get you started.

Our coverage begins officially at Midnight with some reposted reviews before the main stuff stops dropping every couple of hours through much of the festival. Look for as many as a dozen reports a day through the early days of out coverage (which will run a week beyond the festival).

Not that you will notice with all the coverage we will be having, but reports of the the actual festival will be scarce the first four days. I and the crew will be going from very early in the morning until midnight so the pictures and reports from the talks, concerts ans screenings may be token with fuller reports to follow.

The best thing to do is watch the Unseen twitter page and those of all of our reporters accounts (which are in the sidebar up top) or just keep checking the website very couple of hours to see what appears.

And now if you don't mind we are going to go off and get ready to spend eleven days in the dark collecting cinematic goodies with all of you. Wish us luck- and keep reading.
Posted by Steve Kopian at April 24, 2019