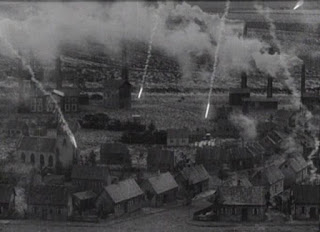 Danish film about the end of the world is probably the first post apocalyptic film ever made. It is also a messy duck of a film with way too much going on for a 77 minute film.

The film begins as we watch people from various walks of life going through their daily routines. Wen word reaches the population that a comet will touch the earth chaos reigns. Then the comet comes and wipes out pretty much everyone.

Long meaningful sequences fill much of the first hour as director August Blom goes about setting up stories lines with very clear moral implications. He is making a film with a point and not just something with a spectacular ending.  This makes for slow going as we are given probably way too much to chew on before the comet comes.

Once the comet comes and the world deals with the effects of the comet the film becomes haunting as actual locations of destroyed homes and landscapes are used to reflect the destruction. There is a realness to the end of the world that I don't think any other similar film has ever had- we feel that this is the end. It makes for one hell of a pay off.

While far from perfect THE END OF THE WORLD is a real curio and recommended to anyone who wants to see the first end of the world film or just an intriguing  footnote with the warning that this can be a slow go for a chunk of it.
Posted by Steve Kopian at April 15, 2019