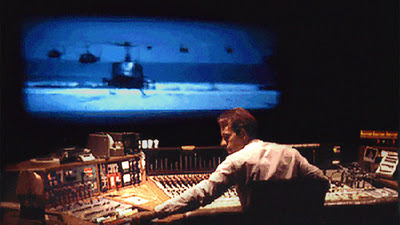 MAKING WAVES THE ART OF CINEMATIC SOUND is a history of the way sound has evolved in the movies. From the silent days and the first efforts to sync sound effect, through mono and finally surround sound it’s all here.

As a cinema experience MAKING WAVES is a blast. If you get a chance to see it in a theater with good sound do so. Without question do so. The way the film reveals the evolution of movie sound is truly magical when you hear it go from mono to stereo to multi-track surround sound. It is so cool to listen to the sound march around the theater as well as getting to hear the before and after of footage of classic films.

The problem for me is that as a film on its own terms it could be better structured. Beginning with a look at the big names in modern theater sound the film gives us great portraits of the men who have shaped how we listen to the movies. Gary Rydstrom, Walter Murch, Ben Burtt, Alan Splet, and Ludwig Göransson are all profiled and it’s great. The film then shifts gears and then gives us an explanation of the way sound has evolved as well as what all the different people who do the sound do…

…and that’s the problem with the film, we end where we should begin and begin where we should end. As good and as informative as the film is it should have brought us through the history of sound from silent to the modern day with each master taking us to the next master, and how each change, say the creation of foley added a layer to the onion. Watching the film I kept wondering why we were being shown certain segments at that particular point. Don’t get me wrong it’s not even remotely bad, but it’s like looking at a classic painting with a couple of the figures switched.

Should you see the film? Absolutely. It is a very good look at movie sound. Is is a must? If you can do so in a theater where you will get the full effect.
Posted by Steve Kopian at April 30, 2019