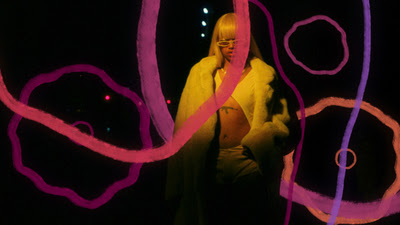 GOLDIE is the story of a girl who lives in a shelter in the Bronx with her two younger sisters, mom and mom’s drug dealing boyfriend, until one day the police come and arrest the mom. (We never actually find out why this happened). Goldie then runs away to prevent child protective services from taking her sisters away. She goes to her old teacher,(who is probably the one intelligent person in the film) for help and a place to stay, when she is rejected there, she goes to friends, all which are quite shady characters.. She’s an aspiring dancer, and gets a spot in a music video, but first she needs money to get the yellow fur coat she has her eyes set on. She thinks this will be her way of making it, and making it big so she can take care of her sisters, and herself.

This movie is a story of hopes, and dreams. It was okay, but I wouldn’t recommend running to see it. There were also strange animations on the screen during the film. First, before any character was introduced, their name would flash on the screen, with one of the sisters saying the name in the background. Other than this, there were other strange animations which I didn’t enjoy. Some scenes were also in slow motion, which I also didn’t work for me.It felt like it was trying to be artsy, but I found it annoying. The film also started with a long intro, was about 5 minutes of credits before the film even started.
Posted by Steve Kopian at April 26, 2019