Robert DeNiro and Martin Scorsese kind of talk at Tribeca 2019 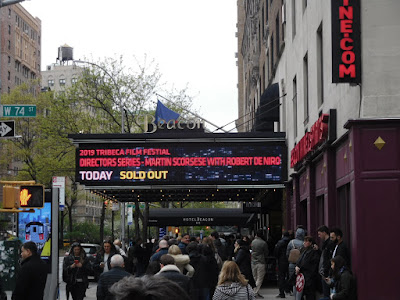 I went Sunday afternoon to see Martin Scorsese be interviewed by Robert DeNiro and it was just kind of okay. Sitting way way away, some where near the throne of the almighty I watched as clips were played, DeNiro kind of asked questions and Scorsese talked about whatever clip was played. There was a lot of fumbling as the two friends didn't seem to know how to move things along. Sure  they were fine once they got going but there were lots of dead spots as we waited for things to click.

While never bad, it was clear from when they did get chatting that itwould have been killer had there been a moderator