The Man Who Killed Don Quixote (2018) finally reaches US theaters 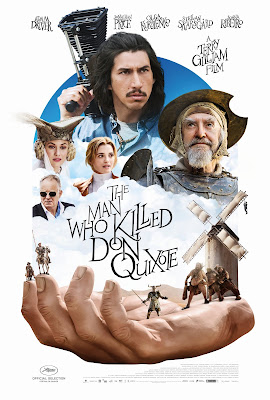 There is a throwaway line near the start of The Man Who Killed Don Quixote  which is spoken by someone in passing which is  “We are what we hold on to.” It’s said almost as an afterthought and no one I saw the film with caught it. For me it was a lightning bolt moment that put the film before me into crystal clarity – that is what Gilliam is getting at. This is a film about our holding one to things so tightly that they change us

Simply the put the film is about Toby, a film director making a big budget commercial for a power company. The commercial apes the Don Quixote story of the attack on the windmill. It also echoes his long ago first film, a glorified student film, of the classic tale. As the commercial deteriorates Toby bolts and returns to the nearby village where he shot his earlier film. Once there he finds the village changed, and not for the better. He also finds the shoemaker who played Quixote lost in the delusion that he is the knight of the story. Through circumstances Toby ends up on the road with Quixote, acting as his Sancho on some impossible quest.

Three decades on, after one legendary implosion and the loss of several stars who were to star Gilliam’s film finally hits the big screen. Is it what he intended when he started? Probably not. Times and people change making it impossible to recreate what we wanted when we were young. But as the quote suggests maybe the film has become a little bit like Gilliam just as Gilliam has become Don Quixote or perhaps Toby.

If you know anything about the decades long effort to make the film you will be hard pressed not to think about  the struggle when seeing it. It is also hard not to try and tie the film to other Gilliam films. In viewing the film we are using the lens we have created in hearing about the film to see the film. In a way we have become the stories of the film that we have held onto. I know that is to be expected, but here we have so many decades of stories, speculation and hope that it can’t help but color it all. We can can’t see it for what it is but compare it with what we have heard and what Gilliam did before, as if that matters to this film or as if this film somehow directly connects to his other films.

Why do we do that? Why do we connect up all the films of the various filmmakers as if they are one grand work? Yes things will link stylistically and thematically (Don Quixote echoes Fisher King, Munchhausen, Tideland and Brazil) but they are not really connected. This is especially true with Don Quixote, which other than a few fleeting moments, feels unlike any other Gilliam film. Rooted in reality the fantasy is not even the madness of the Red King in Fisher King, but entirely man made. While thematically it ties to Munchhausen and Fisher King, it is its own beast. I would bet if someone other than Gilliam made this exact film it would be viewed entirely differently.

When I saw the film at a recent press screening there was a discussion of what is Gilliam trying to say. What was his point with the film? Did it change from what his original intentions were? Why did he have so many themes crisscrossing through it that didn’t seem to go anywhere? There was even some speculation that Gilliam wasn’t sure what he was trying to say.

I would beg to differ. I think he was telling a version of the story he set out to tell with all the other themes and ideas coloring the ride. Yes this is the typical Gilliam questing film where the madness over takes the main character. But there is more, this this is Gilliam exorcising his demons. This is a film about how carrying something like the Man Who Killed Don Quixote will change you. Notions of the emptiness of Hollywood and the rich, how we sell our souls (bodies) to get what we want and other things are all there to color the tale. (And there is even unintended commentary on Trump with a throwaway line and the unavoidable view of Trump as a Russian Oligarch)

I am not sure which character is Gilliam (if he is any of them). It could be Toby the director tormented by his project or it could be Quixote who has gone mad and is only released by death? Maybe he’s both. I don’t think it matters, this is Gilliam’s psyche on full display.

The whole idea of Quixote never dying may sound like a joke but film history is filled with numerous directors trying to make a film version of the story and being broken by their inability to finish the project. At the end of Gilliam’s film his film is dead (finished) and now someone else has to take up the mantle and try again. In the real world someone else will be always be crazy enough to make a new Quixote.

One of the comments I’ve heard against the film is that in addition to the hanging thematic elements bits of plot don’t hang together. People wanted to know why don’t things tie up neatly? For example why does the town dress up to get Quixote back? There seems to be no reason, but there doesn’t need to be. That the towns folk were ready to go to such an extreme length to get him back shows how deep his, and their, madness is. They clearly have had to do this sort of thing before. It also speaks volumes about how damaged the town was by Toby’s film that it is all they have to hang on to.

I think part of the problem with people’s reading of the film is trying to sort out what is real and what isn’t . Quixote is mad and sees the world as insane. But other than the end Toby isn’t mas until the end. Until he takes the mantle of insanity he is normal (mostly-the dream and one or two other small exceptions). So what he sees is real. Things seem disordered because Gilliam is fucking with us. We are expecting Gilliam flights of fantasy like Munchhausen, but he isn’t giving them to us. He is playing everything deadly straight. What we see is real. To take it as anything else is to read too much into the film and what Gilliam is doing…which is much more than it seems. He is very aware of how he is telling his tale – he is just leaving bits of Spanish gold along the way for people to pick up.

I know when he film premiered last year there was all sorts of mixed reaction. Some people loved it and some people didn’t. Many were disappointed. I think those who dislike it or don’t like it were wrong. I think this is one of Gilliam’s best films. It is sleek and lean and runs on all cylinders. I think in five years’ time when people circle back and can see the film for what it is they will find it to be a masterpiece of the highest order. I think in five year’s people will see it that it is not the film they wanted but the one that Gilliam did.