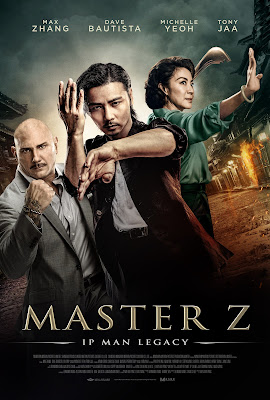 At the end of IP MAN 3 Cheung Tin-chi (Max Zhang) headed off after being beaten by Donnie Yen. MASTER Z picks up with Tin-Chi living quietly with his son. He runs a store but had made some extra money as an enforcer for a local kingpin (but nothing to do with women, children or good men). Not long from walking away from being the enforcer he runs afoul of Kit and his gang. Part of a large crime family headed by his sister (Michelle Yeoh) kit wants to take over the city via any means necessary, but his sister is looking to go legit. In the initial clash between Kit and Tin-Chi Kit loses. He responds by burning down Tin-Chi‘s house and store. This results in an escalating battle that Kit’s sister fails to stop.

I’m going to be honest the plot of MASTER Z isn’t the best. It exists largely as a framework for the action scenes to be hung on and to allow the actors to chew scenery. There are plot holes aplenty and it’s so perfunctory that you can pretty much come in at any point and know exactly who is who and what is what. It’s never ever bad, but it’s not brain surgery. I just wish there was a little more thought to it because there isn’t a lot of suspense as to what is going to happen.

Then again no one is going into the film for the plot. What we want is an action ballet and good god does this film deliver.

An series of escalating skirmishes MASTER Z has some of the best fight scenes I’ve seen in a long time. More old school long than modern the action delights from start to finish. Jin Zhang kicks ass and takes names as he solidly puts him into the pantheon of great on screen fighters. There is a grace and ease to his motion that is a joy to watch, especially when he has such formidable competition.

And competition is the name of the game. From streets or rooms full of bad guys Tin-Chi is forced to fight for his life. In one soon to be classic sequence the battle is above the street and Tin-Chi and his enemies leap from neon sign to neon sign. And when it isn’t hordes of baddies he has to fight the likes of the great Michelle Yeoh, Tony Jaa (who dogs him all film) or Dave Bautista who not only kills it in the battles but also proves he’s a way better actor than you would think from the Guardians of the Galaxy movies. I want to see him in a straight drama.

On pure entertainment level I love this film. This a film I want to hunker down with in a theater with a big tub of popcorn and some friends on a rainy Sunday afternoon because it is just so damn fun.