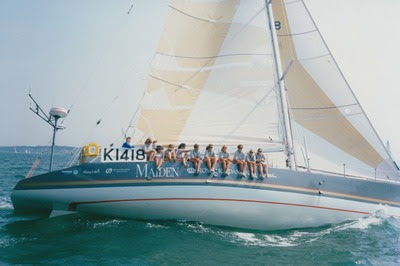 On Oscar night 2019, I distinctly remember a prominent film critic reacting to the news of Elizabeth Chai Vasarhelyi and Jimmy Chin’s Free Solo winning Best Documentary Feature with a withering, dismissive one-word tweet: “Docutainment.” As if such a concept were new, novel, or dirty; documentaries have always been produced to thrill and entertain the masses. They can pull us into outlandish, seemingly impossible stories better than most fiction films because we know what we’re seeing is real, not the product of a director’s imagination or a Hollywood studio’s taste algorithm.

Consider Alex Holmes’ Maiden, a film about British sailor Tracy Edwards and her struggle to skipper the first all-female crew in the Whitbread Round the World Yacht Race in 1989. There’s very little in the film to impress snooty critics as indicative of pushing the documentary format forward. It’s a standard, boiler-plate extreme sports documentary complete with an inspirational hagiography for its hero and a rah-rah, can-do moral about the power of self-determination. It is, quite simply, telling a story. Yet it does it so well we become completely invested, leaving the theater feeling amazed and exhilarated.

The narrative is told in a direct, unfussy manner, opening with Edwards’ backstory of an idyllic childhood giving way to a troubled adolescence thanks to an abusive, alcoholic stepfather. She finally finds meaning in her life after joining the crew of a ship on a lark and a purpose for it after determining to compete in the Whitbread race with a team of women. The rest of the first third of the film is committed to Edwards’ herculean three-year struggle to secure a crew, boat, and sponsorship in the face of incredible misogyny. Even other women are incredulous and unsupportive—one female reporter asks her where her crew will keep their chapstick and mascara onboard. But she perseveres and sets out on one of the grandest adventures this side of Free Solo’s quest to climb El Capitan, braving unruly seas, unforgiving storms, invisible nighttime icebergs, sleep deprivation, onboard accidents, equipment failures, and the constant threat of getting thrown overboard to a nearly instantaneous death of hypothermia.

Yes, it all seems unbelievable and fantastic. And yes, the film is unapologetic in its feminist message of self-empowerment and overcoming obstacles in a hostile, male-dominated world. How could it not be?